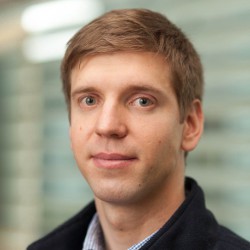 Peter Listov is Marie-Skłodowska-Curie Fellow at EPFL, working with Prof. Dr Colin Jones. His PhD research is about control of periodic orbits for airborne wind energy system, for which he has developed openKITE, which is an open source Robot Operating System (ROS) package for simulation, estimation and control of rigid-wing airborne wind energy kites. From October 2013 to January 2016 he was a Lead Research Programmer and a team leader of the Motion Control group at RoboCV in Moscow, working on optimal motion planning and control for constrained autonomous guided vehicle. From August 2012 to October 2013, he worked as a Junior Researcher in the company, responsible for development of path planning and trajectory tracking algorithms.